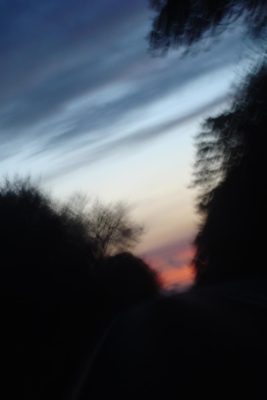 The Frog On The Road.

I walk down a narrow country lane in near darkness. Something small moves on the road before me, a small frog crossing from side to side, almost invisibly. I walk on. A car comes around the bend ahead, and I turn back, bending, searching for the frog. The car stops, waits. I find the frog and scoop up its damp little body, wave the car by, place the frog in the grass verge and walk on home.

Is there a frog now alive that would have been squashed by the car, alive because of me? I can’t know. Maybe. Maybe the car would have missed it. Am I more alive after that brief encounter? Unquestionably! The moment, dancelike, lit up my heart. I love finding myself becoming a frog crane for a moment. Did I move the frog for the frog’s sake or for mine? I thought it was for the frog’s sake, but no, I see it was for mine. I could not have done other. It was choiceless. It was all for me. I could not have done that to myself, walked on with the image of a possibly squashed little frog in my mind. Left it to its fate.

Yet, what of other cars? What if another car comes along, later, while the frog is renewing its attempt to cross the road? Indeed. I don’t know. Literally. It is not in my path now. I don’t see it as my job to set up camp by the road, spend my nights saving frogs. If I found myself moved to do so, I would. I don’t, though. I was moved to continue on.

For me, that moment happened to show me thoughtless action, kind action, instant action, my true nature responding to itself.

This particular Katism is one of my favourites. Everything happens to me, feels like the sigh of the victim, feeling out of control of life, battered, helpless, overwhelmed. That’s been a familiar state of mind for me for years, underpinned by another fault, this shouldn’t be happening to me, it shouldn’t be like this!

Everything happens for me, not to me, opens me to another view altogether. It’s an extraordinary feeling of everything turning around, opening out  before me, for me to see, to appreciate and, or to wonder at. I see that for a nanosecond I wondered whether to try to save the frog. Wondered what the car driver thought. There would have been a time when I would have hesitated too long, and lost the opportunity. Fear of what the other thought of me would have embarrassed me, frozen me, I’d have carried on, covered up, pretended, shut down to feelings within. I’d have feared looking stupid. Felt awkward for holding the driver up. Now I see, in the mirror of that moment that none of that happened. Barely a trace of those fears was present. Instead I noticed what it feels like to act without fear, how fluid and effortless it was. What a delight it was.